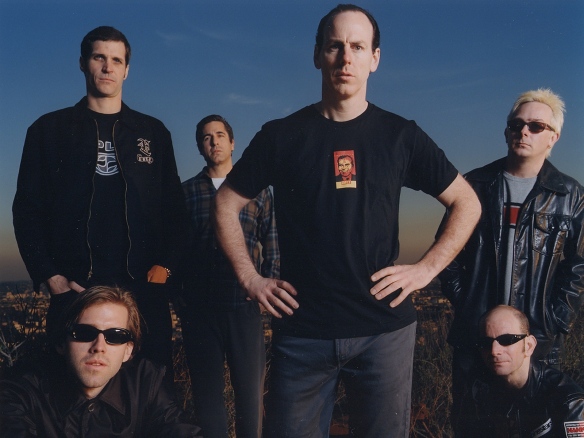 Bad Religion, the band that really got me into punk rock when I first bought 1998’s No Substance by pure happen stance.  Bad Religion is into their 34th year of punk rockin’ it.  They started up in 1979 in Los Angeles, CA.  First show was November 11th 1980 in Burbank, CA.  Back when the now widely known Epitaph Records was nothing more than a name and P.O. Box that Mr. Brett put on the album sleeves to say “yeah, we have a label.”

Their music has been instrumental in shaping the sound of both the original hard core scene and the later melodic hard core genre.  Greg Graffin himself who holds numerous advanced degrees in a variety of subjects and currently boasts 3 books covering religion, Anarchism, evolution and Naturalism has caused many a punk rocker to get educated whether by institution or self. It has definitely been instrumental in my own studies of varying subjects.

They currently stand at 16 full length studio albums making them one of, if not the most prolific punk band along with 34 for years without any hiatus periods.As far as I’m concerned every album by these guys has been great. Even their “dark period” as Graffin calls it when Mr. Brett had temporarily left the band.  My favorite album is still the All Ages compilation.  2nd album I got from them and it just blew my mind.  Still hits me just right all these years later.

This band has been attached to some of the best times in my life and been a soundtrack to getting through some of the worst.  Other than the impact of the band themselves, Epitaph has been a force for putting punk on the map with a number of seminal releases in the 80’s and 90’s scenes.  Also their sub labels of Hell Cat and Burning Heart have done the scene a lot of good.

BR has been a driving force in my constant effort to keep up on the increasingly fucked world we inhabit.  So, if you don’t know this band, research and hear now!  If you’ve not listened in a while give ‘em another spin and see if the magic is still there.