In 2001 melodic political hard core powerhouse Pipedown droppwd their dwbut ablum on A-F Records, Enemies Of Progress. This ripper hits just as hard today. They blasted out of the Pittsburgh scene and sound like a more melodically inclined Behind Enemy Lines. This whole record is solid from front to back like all of these post hard core template albums that were coming out in this era of hard core and punk that really got us thimking. And damn the guitars were amazing. It’s like this band started at the top of their game. The vocals that go from almost sorrowful cleans to this war cry of a scream echo through every track on this. Download or buy a copy of you can find it and get to know this release along with anything else from this time period of music that was our soundtrack for fighting the system.

In 2002 my unquestionably favorite album of youth crew hard core dropped. Thought Riot was a fuckin bomb blast out of Modesto, CA. The beat way I can describe their sound is a perfect blend of the best elements of AFI, Straght Edge Hard Core and Anti-Flag. The album Shattered Mirror Syndrome was another amazing gem from A-F Records. My 2 top tracks are Save The Humans (a call out of the manifest destiny our species has propagated over every aspect of the planet) and Sign Of The Times (a questioning of those who get into sXe hXc because it’s the trendy thing to do as it was in that era). The dual vocals of Mark’s near horror clean parts and Kelly’s brutal scream are still amazing. Every time I blast this I’m brought back to the time I was able to catch em live and how they were every bit as awesome as I thought they were from the countless times I’ve listened to their songs. Sadly Thought Riot isn’t around anymore, but the music still matters 18 years later. Check the link below and play this loud!

This isn’t a new but a fucking classic! In 2003 Whatever It Takes released their full length album on A-F Records which also included their Stars and Skulls ep. They were an amazing blend of east coast emo and hard core. The vocalist is Anti-Flag’s own Chris#2. I remember first hearing a couple of their songs on a comp and following the lead up to the release. I was fucking stoked on it! Right from the first track City Streets, Summer Heat i was hooked in (still one of my favorite tracks off of this). My other favorite is Post Marked Yesterday which is just a perfect early 2000’s emo track. The whole release is just amazing front to back. It perfectly captured an era of the scene I really miss. I bugged so many people in my local scene to listen to this. The playing and songwriting are fucking solid. This album still means a lot to me 17 years later and Chris’ voice is perfect for this! Click the links below which include a recent acoustic set by Chris #2 of 11 of these songs and play it fucking loud!

The A-F Records debut from Pittsburgh Punx Late Comer dropped today. Thoughts like a buzz bomb of straight ahead punk! The vocals sound like a cross breed of Propagandhi and Hot Water Music combined with pulse pounding music. Stream and buy this one! Punk ain’t fuckin dead! 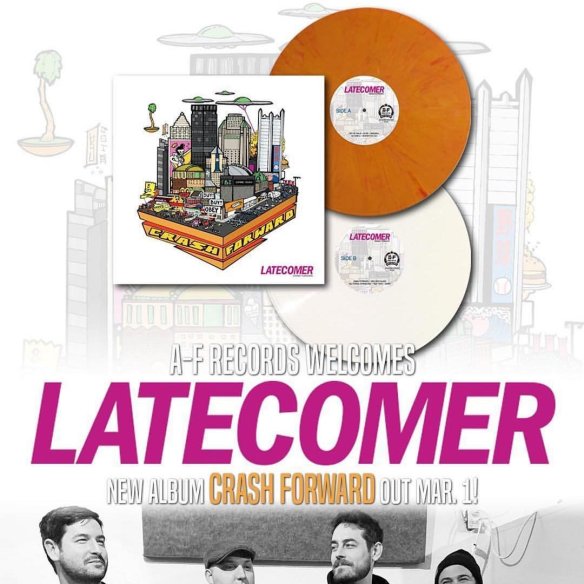