The Most Common ideologies and philosophies within the punk subculture. 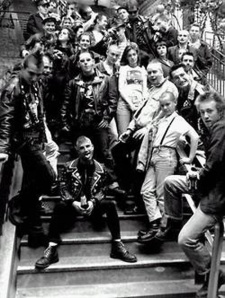 Punk ideologies are a group of varied social and political beliefs associated with the punk subculture. In its original incarnation, the punk subculture was primarily concerned with concepts such as rebellion, anti-authoritarianism, individualism, free thought and discontent. Punk ideologies are usually expressed through punk rock music, punk literature, spoken word recordings, punk fashion, or punk visual art. Some punks have participated in direct action, such as protests, boycotts, squatting, vandalism, or property destruction. 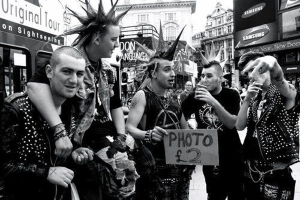 Punk fashion was originally an expression of nonconformity, as well as opposition to both mainstream culture and the hippie counterculture. Punk fashion often displays aggression, rebellion, and individualism. Some punks wear clothing or have tattoos that express sociopolitical messages.

An attitude common in the punk subculture is the opposition to selling out, which refers to abandoning of one’s values and/or a change in musical style toward pop or more radio-friendly rock in exchange for wealth, status, or power. Selling out also has the meaning of adopting a more mainstream lifestyle and ideology. The issue of authenticity is important in the punk subculture, the pejorative term “poseur” is applied to those who associate with punk and adopt its stylistic attributes but are deemed not to share or understand the underlying values or philosophy.

Because anti-establishment and anti-capitalist attitudes are such an important part of the punk subculture, a network of independent record labels, venues and distributors has developed. Some punk bands have chosen to break from this independent system and work within the established system of major labels. The do it yourself (DIY) genre is common in the punk scene, especially in terms of music recording and distribution, concert promotion, magazines, posters and flyers. On religious issues, punk is mostly atheist or agnostic, but some punk bands have promoted religions such as Christianity, Islam, the Rastafari movement or Krishna. 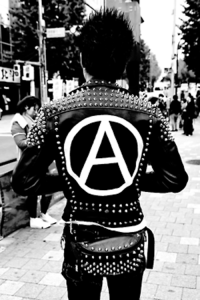 Anarcho-Punk
Anarchism And Left-Libertarianism
There is a complex and worldwide underground of punks committed to libertarian socialism or anarchism as a serious political ideology, sometimes termed “peace punks” or “anarcho-punks.” Whereas some well-known punk bands such as the Sex Pistols and The Exploited sang about general anarchy, they did not embrace anarchism as a disciplined ideology. As such, they are not considered part of anarcho-punk. Notable anarchist punk artists include: Aus-Rotten, Dave Insurgent, Crass, Dick Lucas, Colin Jerwood, and Dave Dictor.

Apolitical Punk
Socio-Political Activist
Some punks claim to be non-political, such as the band Charged, GBH and the singer G.G. Allin, although some socio-political ideas have appeared in their lyrics. Some Charged GBH songs have discussed social issues, and a few have expressed anti-war views. G.G. Allin expressed a vague desire to kill the United States president and destroy the political system in his song “Violence Now”. Punk sub-genres that are generally apolitical include: glam punk, psychobilly, horror punk, punk pathetique, deathrock and pop punk. Many of the bands credited with starting the punk movement were decidedly apolitical, including The Dictators, Ramones (which featured staunch conservative Johnny Ramone alongside left-wing activist Joey Ramone), New York Dolls, Television, Johnny Thunders and The Heartbreakers, and Richard Hell and The Voidoids. 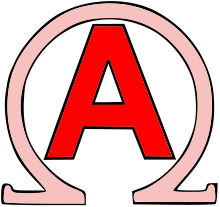 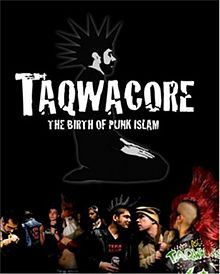 Islam Punk
Muslim
Taqwacore Punk a sub-genre centered around Islamic beliefs, its culture and its interpretation. The Taqwacore scene is composed mainly of young Muslim artists living in the United States and other western countries, many of whom openly reject traditionalist interpretations of Islam. There is no definitive Taqwacore sound, and some bands incorporate styles including hip-hop, techno, and/or musical traditions from the Muslim world.

Krishna Punk
In the 1990s, some notable members of the New York hardcore scene, including Ray Cappo (Youth of Today, Shelter and other bands), John Joseph (Cro-Mags) and Harley Flanagan (Cro-Mags) converted to Hare Krishna. This led to trend within the hardcore scene that became known as Krishna-core.

Liberalism Punk
Liberal punks were in the punk subculture from the beginning, and are mostly on the liberal left. Notable liberal punks include: Joey Ramone, Fat Mike, Ted Leo, Billie Joe Armstrong, Crashdog, Hoxton Tom McCourt, Justin Sane, Tim Armstrong and Tim McIlrath. Some punks participated in the Rock Against Bush movement in the mid-2000s, in support of the Democratic Party candidate John Kerry.

Nazi punks are different from early punks such as Sid Vicious and Siouxsie Sioux, who are believed to have incorporated Nazi imagery such as Swastikas for shock or comedy value.
In 1978 in Britain the white nationalist (White Nationalism), had a punk-oriented youth organization called the Punk Front. Although the Punk Front only lasted one year, it recruited several English punks, as well as forming a number of white power punk bands such as The Dentists, The Ventz, Tragic Minds and White Boss 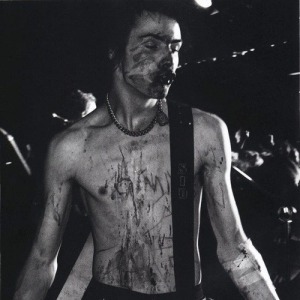 Nihilist Punk
Nihilism
Centering around a belief in the abject lack of meaning and value to life, nihilism was a fixture in some protopunk and early punk rock. Notable nihilist punks include, Iggy Pop, Sid Vicious and Richard Hell.

S. I. Punk
The Situationist International
This was allegedly an early influence on the punk subculture in the United Kingdom.[citation needed] Started in continental Europe in the 1950s, the SI was an avant-garde political movement that sought to recapture the ideals of surrealist art and use them to construct new and radical social situations. Malcolm McLaren introduced situationist ideas to punk through his management of the band Sex Pistols. Vivienne Westwood, McLaren’s partner and the band’s designer/stylist, expressed situationist ideals through fashion that was intended to provoke a specific social response. Jamie Reid’s distinctive album cover artwork was openly situationist.

Straight Edge Punk
Straight Edge And Hardline Subculture
Straight edge punk, which originated in the American hardcore punk scene, involves abstaining from alcohol, tobacco, and recreational drug use. Some who claim the title straight edge also abstain from caffeine, casual sex and meat. Those more strict individuals may be considered part of the hardline subculture. Unlike the shunning of meat and caffeine, refraining from casual sex was without question a practice in the original straight edge lifestyle, but it has been overlooked in many of the later reincarnations of straight edge. For some, straight edge is a simple lifestyle preference, but for others it’s a political stance. In many cases, it is a rejection of the perceived self-destructive qualities of punk and hardcore culture. Notable straight edgers were Ian MacKaye and Minor Threat who put the straight edge music movement on the map, Tim McIlrath, Justin Sane, and Davey are others who promoted the straight edge lifestyle.

Havok Punk
Criticism Of Punk Ideologies
Punk ideologies have been criticized from outside and within. The Clash occasionally accused other contemporary punk acts of selling out, such as in their songs “(White Man)” In Hammersmith Palais” and “Death or Glory”. Crass’s song “White Punks on Hope” criticized the late-1970s British punk scene in general and, among other things, accused Joe Strummer of selling out and betraying his earlier socialist principles. Their song “Punk is Dead” attacked corporate co-option of the punk subculture.

Dead Kennedys front man and always controversial Jello Biafra wrote many songs criticizing aspects of the punk rock subculture and he once accused the punk magazine Maximum Rock n Roll of “punk fundamentalism” when they refused to advertise his punk rock label “Alternative Tentacles” records because they said the records “weren’t punk”. The Misfits’ Michael Graves, a right-libertarian who co-founded the “Conservative Punk” website, argued that punks have become “hippies with mohawks”.